All you should know about Series and Parallel Circuits 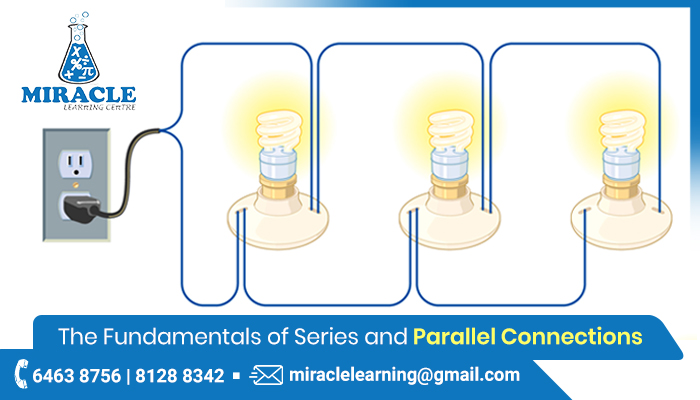 15 Dec All you should know about Series and Parallel Circuits

Posted at 06:24h in Science Tuition by admin
0 Likes
Share

Simple circuits (those with only a few components) are typically quite easy to grasp for novices. When more components join the party, though, things may get sticky. What is the direction of the current? What’s going on with the voltage? Is it possible to make this more understandable? Intrepid reader, have no fear. There’s a lot of useful information after that.

What is the definition of a series circuit?

The current and voltage relationships in a series circuit are the inverse of those in a parallel circuit. The voltage across each series element (V1, V2, V3), on the other hand, fluctuates depending on the impedance (in this case, the resistance) of each element. The voltage provided by the source (Vs) is equal to the total of the individual voltage drops across each series element, according to Kirchhoff’s Voltage Law (KVL).

The benefit of series circuits

Circuit resistance increases as the total number of components in the circuit grow.

If a single point in the circuit fails, the entire circuit will fail.

What is the definition of a parallel circuit?

In a parallel circuit, if one component fails, the current continues to flow through the other components, allowing the remaining components to function properly.

Because the voltage across each component in a parallel circuit is the same, all components function efficiently.

You may quickly connect or detach a new component in a parallel circuit without impacting the operation of another component.

An additional voltage source cannot be used in a parallel circuit.

The connecting of a parallel circuit necessitates a large number of wires.

Don’t forget to watch this video to have a deep comprehension on this topic.

We discover that circuits may be divided into two types: series and parallel circuits. The current flowing through each component in a series circuit is the same, and the voltage across the circuit is equal to the total of the individual voltage drops across each component. Because there is only one way for electricity to flow, we must ensure that all components work properly in order for the circuit to run smoothly. A parallel circuit, on the other hand, is made up of multiple branches such that the current is divided and just a portion of it passes through each branch. For example, a parallel circuit is used in a home’s wiring system because even if one of the lights burns out, the current may still flow through the rest of the lights and appliances.

We at Miracle Learning Centre provide the most cutting-edge coaching sessions for secondary science tuition in Singapore, primary science tuition, and IP science tutoring. Come join us as we play games, do puzzles, watch films, look at drawings, participate in group activities, and much more while learning difficult Science topics in a fun way.