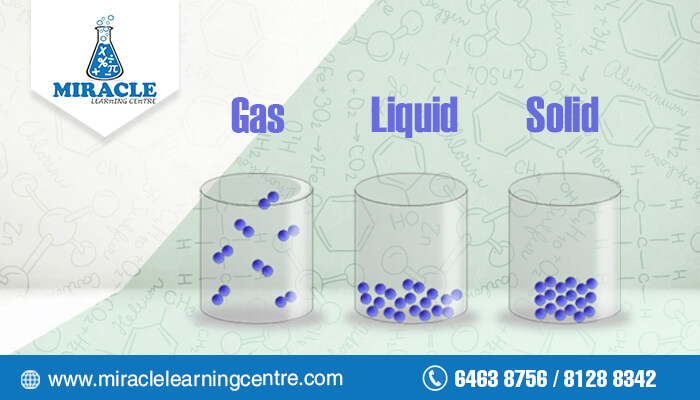 Posted at 06:33h in Chemistry Tuition by admin
0 Likes
Share

Kinetic particle theory states that all matter consists of many, very small particles which are constantly moving or in a continual state of motion. It explains the properties of the different state of matter.

All particles have energy, but this will differ depending on the temperature of the environment the sample is in. This would then help to determine if the substance exist in the solid, liquid or gaseous state.

There are mainly 3 different states, Solids, liquids and gases and they all have different amounts of energy. They are all fixed differently and move in different ways.

Solid cannot be compressed and have a definite shape. This is because there are strong intermolecular attractive forces between individual atoms or molecules are greater than the energy causing them to move apart. Hence, the atoms or molecules does not have enough energy to move and are joined together in the shape that they were in where they lost that energy.

Liquid can be compressed and does not have a definite shape. In a liquid, intermolecular attractive forces hold the molecules together while having sufficient kinetic energy to move past one another.

Gas can be compressed and does not have a definite shape. The kinetic energy of the molecule is greater than the attractive force between them, thus they are much further apart and travels at high speed. In general, there are no attractive forces between each particle.

A change of state may occur when the energy of the particles is changed. They are usually irreversible changes that do not involve changes in matter’s chemical makeup or chemical properties.  Common changes include melting, freezing, sublimation, deposition, condensation and vaporization.

Condensation: Process where the state of matter changes from the gaseous phase into the liquid phase. It usually occurs when water vapor touches a cooler surface and condenses into liquid water.

Freezing:  Process where the state of matter changes from the solid to liquid phase. It usually occurs when the molecules of liquid slow down to a point where their attractions cause them to arrange themselves into fixed position as a solid.

Deposition: Process where the state of matter changes from the gaseous to solid state without passing through the liquid phase.

Melting:  Process where the state of matter changes from the solid to liquid state. This happens when the molecule of a solid accelerates and the motions overcome the attractions so that the molecules can move past each other as liquid.

Vaporization: This process is also most commonly known as the “boiling” process.  This process changes from the liquid to gaseous state. Water molecules are moving so fast that they break free of the attraction that holds them together in the liquid state.

Sublimation: Process where the conversion of a substance from sold to gaseous state without passing though the liquid state. This occurs when molecules in a solid travels fast enough to overcome the attraction from other molecules and become a gas.