Is it Truly Essential to Have Difficult PSLE Math Questions? 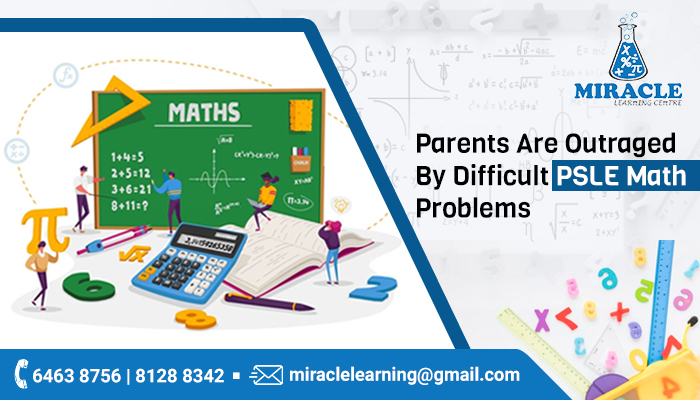 27 Dec Is it Truly Essential to Have Difficult PSLE Math Questions?

Posted at 07:02h in Maths Tuition by admin
0 Likes
Share

The goal of the Singapore PSLE Mathematics test is to measure children’s mathematical achievement at the end of primary school concerning the primary mathematics curriculum’s objectives.

The difficulty of the PSLE math questions has resurfaced as a source of debate, with some parents claiming that it was so difficult that their children were in tears.

Many parents and kids are alarmed by the recent rash of difficult PSLE arithmetic problems. Are they required?

Despite concerns from parents and students that this year’s PSLE math questions were excessively tough, the Singapore Examinations and Assessment Board (SEAB) said that “the overall level of the examination paper is comparable to previous years.”

After the first paper, one parent reported she received a sobbing phone call from her daughter, who stated it was more difficult than she had anticipated.

The majority of kids and parents recognize that more difficult questions are required to identify the weaker from the better pupils. Many people, however, criticize the appropriateness of including a handful of problems on the paper that appear to be extremely tough from the perspective of relatively clever math students or even parents who have experience instructing their children in P6 arithmetic. Some argue that the appearance of such questions demoralizes pupils who may have worked hard to prepare for their PSLE only to be disappointed or disillusioned by the seemingly impassable barrier those questions appear to provide. Many believe that the local school system is stressful and that we should not put extra stress on our young 12-year-old children who have already spent much of their youth dealing with a difficult primary school curriculum.

The new PSLE scoring method, which uses bands rather than absolute scores, is intended to reduce the test system’s inclination to discriminate finely on the academic ability of our young children. Many people don’t understand how the exceedingly difficult PSLE questions fit into this new manner of doing things.

One message we may give our math PSLE candidates is that they should not be disheartened if they are unable to answer a few questions, as long as they have given it their all and tackled the remaining questions to the best of their abilities. After all, the new scoring method is intended to mitigate the impact of, say, leaving one or two questions blank or incompletely completed, which is a regular occurrence in stressful test situations, whether or not there are “killer questions.”

Nonetheless, we must consider the sentiments of these young children since they may not comprehend why they are being asked such difficult questions or how the new scoring system is intended to mitigate the consequences of failing to answer such questions on the final test. After all, the great majority of them aren’t vying for a coveted scholarship or a place at a prominent educational institution. It is more vital to have a diversity of questions that test multiple skill sets in a nationwide exam taken by students of widely varying levels of ability than it is to have one or two very difficult questions aimed at differentiating the brilliant from the already bright.

Back in Singapore, even though Singapore leads the world in mathematics, parents sometimes face an uphill battle in engaging their children in maths. Many parents are opting for maths tuition in Singapore to assist their children to understand this difficult PSLE math questions throughout.