05 May Physics Tuition Questions and Answers

1. A sonar sends pulses of ultrasound from the bottom of a ship. The reflected pulses are picked up by a receiver. The speed of ultrasound in water is known to be 1600

2. Diagram A below shows an object in water being view vertically above the surface of the water. 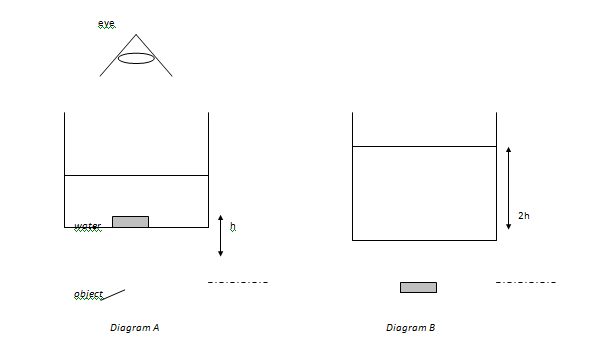 (a) On Diagram A, show how you would determine the image of the object as view by the eye by means of a ray diagram. Ray diagrams need not be drawn to scale.
(b) Given the refractive index of water to be 1.3, solve for h and determine how deep the image is in Digram A when more water is poured into the beaker such that the depth of the object is twice that of the original depth in (a). The depth of the image in Diagram B is 5 cm. (The refractive index of water can be obtained by using the depth of object in water ÷ the depth of image in water)

3.The experiment set-up below is used to determine the focal length of a lens, L.

In the experiment, the lens is moved between B and C until a sharp image is formed on the card.

(a) What is meant the focal length of a converging lens?
(b) Between which two points, A, B, C or D should the distance be measured to determine the focal length of the lens?
(c) Complete the path of the 2 rays from a point on the cross-wire of the card on the diagram above to indicate the path taken by the light rays to form an image on the card.
(d) State two characteristic of the image formed on the card.

4. One of the causes of fire at patrol stations is when vehicles are being refueled.

The driver of the vehicle would normally be charged by the dry condition in the interior of the car and the rubbing of insulators inside the car like the steering wheel or the floor mat.

(a) Explain how the car became negatively charged at the area nearest to the fuselage?
(b) Explain why a build-up of charges on the driver’s hands and the car could be dangerous.
(c) What can the driver do to reduce the chances of fire caused by charge build-up?