Posted at 11:49h in Maths Tuition by admin
0 Likes
Share

At Miracle Learning Centre, we teach you interesting stuff in math tuition. In our previous maths tuitions, we have already explored some important properties of triangles. In this tutorial, we are going to explore some more interesting properties of triangles. Today, in this maths tuition, we are going to learn about the orthocenter, the in-centre and the circum centre of a triangle. If you have not gone through our previous blogs related to triangles, it is highly recommended that you read those articles and develop a solid understanding of the concepts discussed there before going through this article.

For any triangle, the orthocenter is the point where three altitudes of a triangle meet. Let us see this with an example. Consider the following triangle ABC: 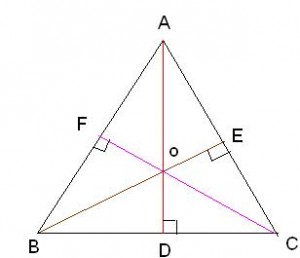 BE and CF are also heights of the triangle ABC. AD, BE and CF all meet at the point O which is known as the Orthocenter of a triangle.

Remember that when O is the Orthocenter of a triangle, then

For any triangle, the incentre is the point where the three angle bisectors meet. Let us see this with an example. Consider the following triangle PQR:
P

In the above triangle PQR, the line segment PS divides the angle QPR into two equal angles. That is:

The line segment PS is known as the angle bisector of the angle QPR.

I is the point where all these points meet and I is known as the incentre. If we drew a circle inside the triangle PQR is such a way that the circle touched each side of the triangle at exactly one point, then incenter I would have been the center of such a circle.

For any triangle, the circumcenter is the point where three perpendicular side bisectors meet. Let us see this with an example.
O
R
Q
P
L
K
G
F
E
D
C
B
A

In the triangle ABC above, the line segment DE bisects BC i.e. divides it equally into two parts BP and PC. As a result, P is the mid-point of BC. DE is also perpendicular to BC. Thus, DE, in this case is the perpendicular bisector of the side BC.

For equilateral triangles, the incenter, the circumcentre, the centroid and the orhocentre is the same point. It is a homework for you to find out why that is the case. In case you cannot figure out yourself, you can seek help from your peers or teachers at your math tuition.

At Miracle Learning Centre, learn Maths with a new approach from the best teachers of Singapore. They are determined to provide you with the simplest solutions for every tough Maths problem.