11. a) Outline a method for the preparation of a pure, dry sample of lead(II) sulfate starting from lead(II) oxide and dilute nitric acid.

b) An experiment was carried out to investigate the rate of reaction between zinc and dilute sulfuric acid under different conditions.
In Experiment X, 100 g of zinc granules was reacted with 100 cm3 of sulfuric acid of concentration 1 mol/dm3, at 20 °C.
In Experiment Y, the reactants and temperature were the same as in Experiment X but this time, a few drops of aqueous copper(II) sulfate were added.
The volume of gas was collected and measured at one minute intervals, and the results are shown in the graph below. 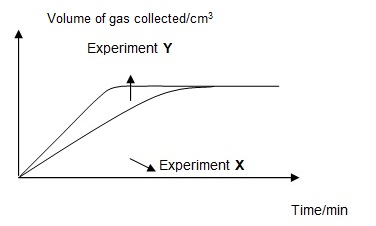 (i) State briefly how the results of the two experiments differ and suggest one reason for the difference.
(ii) Calculate the volume of gas produced.
(iii) Why should only a small amount of copper(II) sulfate be added? How would the results of Experiment Y be affected if too much copper(II) sulfate was added? Explain, using chemical equations, why only a small amount of copper(II) sulfate should be used in this reaction.
EITHER
12. a) Aspirin can be regarded as an acid. Although its formula is complicated, it can be represented by H+A-, where A- is the anion. Aspirin is not very soluble but its sodium salt is. Addition of dilute hydrochloric acid to this soluble sodium salt will cause the aspirin to precipitate out.
(i) Write an equation, with state symbols, to show the precipitation of aspirin when hydrochloric acid acts on the soluble sodium salt of aspirin.
(ii) What does the low solubility of aspirin tell you about its strength as an acid? Explain.
(iii) When a person takes the soluble sodium salt of aspirin, the precipitation only occurs in the stomach. Explain why.

According to the bottle, each 50 mg tablet of Corbix contains 30 mg of vitamin C.
The pupil carried out the investigation by the oxidation of the ascorbic acid with iodine, I2, to form dehydroascorbic acid, as shown by the equation:

The pupil crushed one tablet of Corbix and dissolved it in water.  It was titrated against iodine solution of concentration 0.005 mol/dm3. Results showed that the average volume of iodine solution required was 28.0 cm3.

Calculate the percentage of vitamin C present in each tablet of Corbix, and hence determine if each tablet fulfils the recommended daily requirement.

Did you answer the Secondary Chemistry Tuition Question correctly?

Add PbO powder to a fixed volume of dilute nitric acid until no more can react.  Filter to remove insoluble PbO.  Collect the filtrate,  which is Pb(NO3)2 solution, and mix it with sodium sulfate solution.  A precipitate of lead(II) sulfate forms.  Filter and collect the residue which is the lead(II) sulfate precipitate.  Rinse with cold deionised water and pat dry between sheets of filter paper.

b.i.  From the graphs obtained, the rate of reaction for Exp Y is faster than Exp X, as shown by the steeper initial gradient for Exp Y.

This is due to the addition of copper(II) sulfate, which acts as  a catalyst.  The catalyst increases the rate of reaction by lowering the activation energy, and does not affect the final volume of gas produced.

Concentration of the acid decreases and zinc is also being used up; hence the rate of production of gas decreases.

This will in turn cause lesser hydrogen gas to be produced, as lesser zinc will be available for reaction with the acid.

iii.  Precipitation requires hydrochloric acid, which is available only in the stomach.

ii. The hydrogen atoms from the ascorbic acid react with oxygen (combine to form water).

Hence preventing the oxygen from reacting with the food, which would have caused the food to be oxidised.

Learn from our Chemistry Tuition Question and Answer.

(Specialist in Science and Maths) for Primary, Secondary and JC levels.