16 May Xenon and It’s Compounds

Posted at 05:12h in Chemistry Tuition by admin
0 Likes
Share

Chemistry tuition lesson for this lesson focuses on xenon and its compounds. Xenon is in Group 0 and is an inert gas. Xenon is a chemical element with the symbol Xe and atomic number 54. It is a colorless and odorless rare gas. Xenon is found in the Earth’s atmosphere in trace amounts. Most of the noble gases found in the air on Earth is argon.

Xenon is not flammable as it is a noble gas with a complete outermost shell of electrons. Xenon exists as a gas due to its low melting point and boiling point. However, xenon is a heavy gas compared to the other gases like helium.

Under very high pressure, xenon reacts with fluorine to form compounds. However, Xenon does not usually form compounds because it has a stable noble gas configuration.

Do you know why xenon reacts with fluorine but not with other elements? This is because Fluorine is the most reactive halogen. Fluorine has the smallest size compared to the other non-metals. Hence it can attract electron the most easily. Reactivity decreases down Group VII.

One compound of xenon with fluorine has the formula XeF4. It is xenon tetrafluoride.

This diagram shows the bonding in xenon tetrafluoride.
Only the outer electrons are shown.

Xenon tetrafluoride has a low melting point as it is a simple covalent compound with a simple molecular structure. The intermolecular bonds are weak and are easily broken. Little energy is needed to overcome these weak intermolecular forces of attraction. 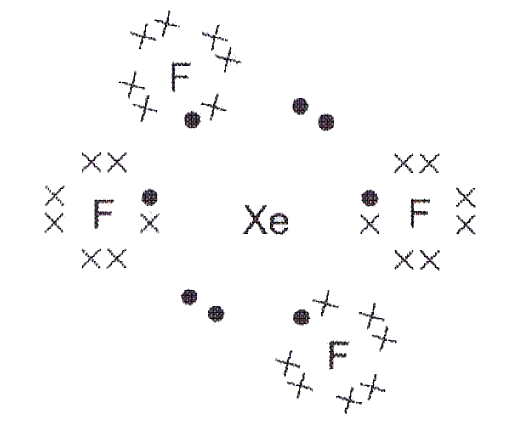 The classes of Miracle Learning Centre are nothing like your traditional tuition classes. In our classes, you can play games, watch videos, check fun facts, participate in group activities but all of these are done to help you learn Chemistry. This unusual yet effective way of ours has been helping various students of Singapore to increase their marks in just a few days.